Each year our agency compiles the financial data of 150 contractors that we provide surety bonds for throughout the state of California to look at trends in the marketplace ranging from gross profit margins, net profit margins, backlogs, and competition. This proprietary data ranges from 2008 through June of 2022, and provides a unique insight into the current state of the market along with clues about what is to come.

Heading into the pandemic, contractors were already challenged with labor shortages. Now that has gotten worse, and inflation and material availability have been added to the list of difficulties that contractors face. While the price increases and availability of a lot of products have stabilized in 2022, our data shows it has no doubt impacted contractors’ operations and profitability.

Despite these obstacles, there have been some very positive things too. Construction companies were by far some of the greatest beneficiaries of the federal PPP loans and Employee Retention Credits. According to the publication, The Californian, the construction industry received the most approved PPP loans and the third greatest amount of money in California from the PPP program totaling $11.8 billion. For many of our contractor customers, the Employee Retention Credits were equally as significant.

Construction work in the market has continued to stay plentiful, and the competition, as we discuss in our report, has been manageable this past year; in many cases it is in line with the pre-pandemic levels.

Surety companies also indirectly benefited from the significant PPP loans and Employee Retention Credits, because there is no doubt it saved some construction companies from defaulting on their projects and their performance and payment bonds. As a result, surety company claims and losses against their surety bonds remained at historic lows.

As interest rates rise, we and our contractor customers are keeping an eye on the economy. Some say we are already in a recession and others say it will happen in the near term. According to the Bureau of Economic Analysis, the U.S. economy has already shrunk two quarters in a row meeting the technical definition of a recession. Regardless of the timing, the next question for contractors is how long and deep the recession will be.

In some ways the construction industry in California is well positioned to go through a recession. One of the major reasons is California’s lack of housing. The state is desperately in need of more housing after a decade of underbuilding. According to the Public Policy Institute of California, “The state added 3.2 times more people than housing units over the last 10 years.” Their report goes on to say that California is 3.5 million housing units behind where it needs to be. In addition to the pent-up demand, Governor Newsome recently signed two laws that would open up much of California’s commercial land for residential development, which could pave the way for accelerated residential building.

On the public side, there is still a significant pipeline of projects, some of which are related to the 2028 Summer Olympics, and in addition, there are billions that will be spent related to the federal infrastructure bill that was passed. The California budget for FY22-23 also allocated $2.9 billion from the general fund for school construction on top of the $1.3 billion remaining from the 2016 school bond measure, and allocated $3.25 billion to build a 10,000-mile broadband network.

Get a payment bond quote now

We want to know more about how we can help your construction company get the right contractor bond for your next project.

GET A FREE BOND QUOTE 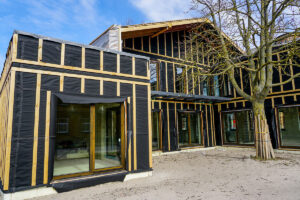